Well of the Cobra

Vault of the Jackal 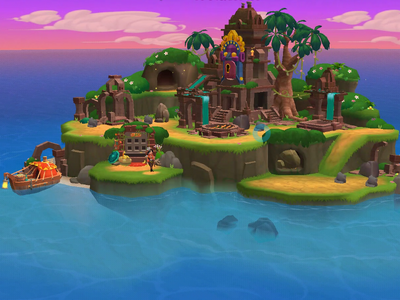 This Island makes use of tools (

Relic Keys and other treasures, roughly 2-3 relic pieces per refresh.

There is also a cave that requires a 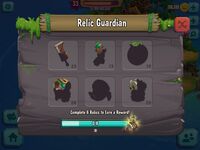 Each Relic is discovered in 6 pieces ("artefacts") each of which is split into 3-8 "shards".

You must gather all the shards (a total of 30) to make the 6 artefacts, then they are combined to recreate the Relic.

Once assembled you win the Relic and can place it on your island.

"It's a shame he died of pneumonia."

A very docile creature, but don't mess with the front end!

The Well of the Cobra.

A lovely wishing well, if your wish was for a cobra.

A sturdy relic archer to guard your relics. Relic safety still not guaranteed.

Different dinosaur bones, also in the correct order... we think

The Vault of the Jackal.

An ancient vault adorned with a black jackal.

A full set of dinosaur bones in the correct places... we think.

Guard your relics with your very own relic guardian. Relic safety not guaranteed.

Retrieved from "https://paradise-bay.fandom.com/wiki/Relic_Ruins?oldid=21715"
Community content is available under CC-BY-SA unless otherwise noted.