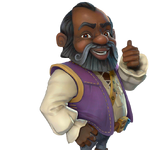 Pike was mistaken for a sea monster when he was washed up on shore covered in seaweed. He completely denies being a pirate, despite all his knowledge of pirates and piracy. He is completely certain that Wesley is a terrible pirate.
When Pike's Trade Post orders and relationship level-ups are sufficient, his area upgrades with a little house with a pirate flag and his boat as a roof.

Retrieved from "https://paradise-bay.fandom.com/wiki/Pike?oldid=20625"
Community content is available under CC-BY-SA unless otherwise noted.