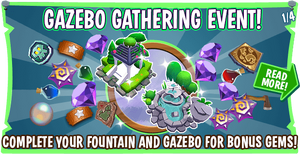 The islanders are getting their green fingers dirty! They decide to build Grand Gazebo and Topiary Fountain decorations. You will need to use certain items to level up each decoration and then join them together when both are complete (similar principle to the Halloween Totems event).

Event pre-requisites: You must have repaired the Bazaar and "met" Pike in order to start the event.

You can place the base of each decoration on your island by dragging it in from the game's build menu (free).

Levelling Up and Rewards

To upgrade your garden decorations you must "feed" them with special supply items which are created in several stages as follows:

1) First you must harvest your Supply Station

harvesters to obtain the special ingredients. Every 45 minutes you will harvest 9 of the following items:

2) You also need to obtain the following special ingredient:

3) Use these harvested ingredients to make the following items :

4) Then use these items to make the main items which are "fed" to the decorations :

The make times and heart rewards for these items are shown below :

Note: Time and gain with Mill Mastery 25% speed bonus are shown in brackets.
Note: Heart values for manufactured items may be reduced while the "Short Build Time" booster is active.

You will receive 2x Supply Station

at the start of the event, and you can purchase 1 more for 100x

(build menu). Supply Stations can be harvested every 45 minutes during the event and will reward 9 items each harvest.

Note: None of the ingredients are sellable to other players.

Each time you supply materials to your decorations you will receive

rewards.
Each time you level up your decorations you will receive various rewards (see below).

Finn's Cheat Sheet : How to make the potions! 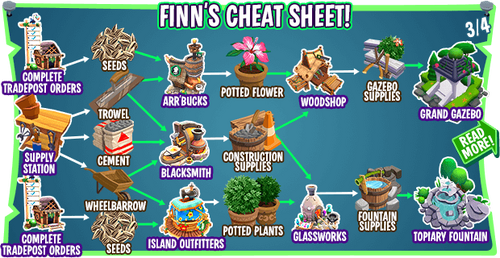 Sharing resources with other Trademasters

You can gift a Trowel

to other players' garden decorations and you will receive Cement

You will receive 1x Cement

.
Your friend will receive 20

for their decoration and 25

You can only gift a resource to the same Trademaster every 6 hours.

Note: In your friends bar the Gazebo event icon

appears to the bottom-right of each avatar when you are able to gift them a resource. Similar to seal dives, friends to whom you have gifted a resource within 6 hours or those that have not activated their garden decorations are moved to the end of the list, regardless of their game level.

Introduction:
Wesley: "Hey Pike! Do you mind helping me out with a project?"
Pike: "Aye lad! What you be needin' ol' Pike for?"
Wesley: "I'll be building a Grand Gazebo on the island."
Pike: "We'll be needing some supplies and plenty of space then."
Wesley: "Trademaster, you heard him! Let's create some space."

Finn: "What are you up to Keani?"
Keani: "Oh, nothing much. I'm hoping to create a fountain. You know, to add more beauty to the island."
Finn: "Sounds fun! Where do we start?"
Keani: "Let's gather some stone first and start the foundation."
Finn: "You got it. Trademaster, let's pick a spot to build this on!"

Keani: "I've asked around the entire island for help on this. We'll need a lot of assistance."
Finn: "Looks like Pike and Wesley are building something too. What's going on over there?"
Keani: "The other islanders are helping them with their project as well. They didn't tell me what it was."
Finn: "I'm sure we can figure it out as they build it. What will we need?"
Keani: "Everything we need will be at the Supply Stations. There are two of them."

Keani: "First step, we'll need to create some Potted Plants at Island Outfitters."
Keani: "It will need a Wheelbarrow from the Supply Stations and some Seeds from orders."
Finn: "We can grab some Construction Supplies at the Blacksmith."
Finn: "We'll need a lot of stuff from the Supply Stations for those."
Keani: "Lastly, we'll combine it all at the Glassworks to create our Fountain Supplies."

Wesley: "For our gazebo, we'll first need a Potted Flower from the Arr'Bucks."
Wesley: "You can make one by crafting together a Trowel from the Supply Stations and Seeds from orders."
Pike: "We also be needin' some Construction Supplies at the Blacksmith."
Wesley: "We finish by combining both at the Woodshop to create our Gazebo Supplies."
Pike: "You can visit your friends' island projects and assist them to receive some more Cement if you run out!"
Wesley: "If you need a refresher on anything Trademaster, please check out the Event Board."

Grand Gazebo:
Wesley: "Well this is coming along smoothly, isn't it?"
Pike: "Aye lad! This will be a great addition to the island when we're done with it."
Finn: "Hey guys! What are you working on?"
Wesley: "Ah, it's... nothing! Nothing at all!"
Pike: "Just some men working on a gazebo."
Finn: "A gazebo, what's that? Some sort of house?"
Pike: "You could say that…"

Pike: "So Wesley, what was that all about?"
Wesley: "I wanted to keep this project a secret is all."
Pike: "How are you gonna keep this here a secret? Look how high it's sticking outta the ground!"
Wesley: "I want this gazebo to be some place special, not only for everyone else but for myself as well."
Pike: "Ah… I'm beginning to understand you now lad. Trademaster, let's keep it going! I want to see how this turns out."

Pike: "It's about time you finally decided to talk to her."
Wesley: "Wh- what? I don't know what you are talking about."
Pike: "Don't bother hiding it, it's as clear as day to anyone."
Wesley: "Is it really that obvious?"

Wesley: "Do you think it'll work Pike?"
Pike: "Will what work boy?"
Wesley: "You know, asking her under the gazebo."
Pike: "Honestly, I don't think it will matter where you do it, but it definitely won't hurt your chances."

Pike: "You want an old man's advice?"
Wesley: "What is it? I'll take anything at this point."
Pike: "Just be confident, show some backbone!"
Wesley: "You think I can do that? Is it really that easy?"
Pike: "I don't see why it shouldn't be. Yer a pirate aren't ya?"

Wesley: "You know what Pike? You're right, I am a pirate. This should be a walk in the park."
Pike: "Or a walk on the plank…"
Wesley: "I didn't catch that. Did you say something?"
Pike: "Nothing at all, I'm sure you'll be fine lad."

Wesley: "And that should do for the finishing touches."
Pike: "Are you finally gonna go for it then lad?"
Wesley: "I suppose there's nothing left to do is there?"
Pike: "Get to it then, she's not going to wait around all day."
Wesley: "Okay, Wesley get yourself together. You can do this!"
Pike: "I'm going to check on that fountain, see if they can use an old man's help."
Pike: "The boy's growing up eh?"

Topiary Fountain:
Finn: "Lugging around these stones is no joke."
Keani: "This takes time Finn, and a lot of hard work."
Sita: "There you all are! I was wondering where you went off to."
Keani: "We're building a fountain."
Sita: "Really? Let me help, I've always wanted a fountain on the island."
Keani: "We can definitely use the hands!"

Sita: "Oh my! It's starting to look like a proper fountain."
Keani: "Do you know where did Finn headed off to Sita?"
Sita: "He mentioned something about Pike and Wesley, what have they been up to?"
Keani: "The boys are working on a construction project of their own, I'm sure we'll see what it is eventually."
Sita: "Ah, that would explain where all the {highlight:Construction Supplies} have gone."

Keani: "Where did you go off to Finn?"
Finn: "I asked what Wesley and Pike were making. Do you know what kind of house a gazebo is?"
Keani: "It's a structure you usually see in parks or scenic areas."
Sita: "A gazebo would also be a lovely addition to the island."
Keani: "I agree, all of us are working on each of our own wonderful island projects."
Finn: "Wait what? It's a house with no doors?"

Sita: "I wonder how Wesley and Pike are faring with the gazebo."
Keani: "They do seem to be keeping rather quiet about it."
Finn: "Maybe it's a surprise? Surprises are awesome."
Keani: "It's pretty hard to construct a gazebo on the island and have it be a surprise."
Sita: "It does look like it would serve as a nice viewing area for two."

Finn: "So what will happen with the fountain when we are done?"
Keani: "We could put fish in it I suppose."
Sita: "People also like to toss coins into them and make wishes."
Finn: "Can we do both?"
Keani: "I don't think the poor fish would enjoy that."

Keani: "Thanks a lot for helping us out Trademaster!"
Finn: "I'm surprised all the islanders are helping us. I mean we even have {highlight:Arr'Bucks} and {highlight:Island Outfitters} making supplies."
Keani: "They said it was a special occasion."
Sita: "Whatever it is, I'm happy everyone is pulling together for these projects."

Keani: "That should do it. We now have a fountain on the island!"
Finn: "So what is it going to be? Are we putting fish or coins in it?"
Keani: "Let's leave that up to the Trademaster, I'm sure the fountain will be cared for either way."
Sita: "We should check how Pike and Wesley are doing. It looks like they are wrapping up."
Keani: "Sure! I've been curious as to how they've been using the supplies."
Finn: "I think I see Pike coming our way!"

After completing both items (view pans to Topiary Fountain):
Pike: "I could see the fountain from over there. You lot didn't do too bad yourselves."
Sita: "The gazebo you and Wesley worked is something to behold as well."
Finn: "Lugging around supplies was hard work, but if Keani's happy with the fountain, I'm happy with it."
Pike: "Let's head over there and you can show me how you utilized those Construction Supplies."
Keani: "Sure thing Pike! So we started with using a Wheelbarrow and some Seeds..."
Sita: "I'm going to head over to the gazebo, the view from there must be marvelous."

Then (view pans to Grand Gazebo):
Wesley "Ah, Sita please come and take in the sights."
Sita: "It is quite lovely, I am impressed you and Pike managed all of this."
Wesley: "I'm glad, I built this hoping that you would like it in particular."
Sita: "You did this for me? That's too sweet of you Wesley! You really didn't have to."
Wesley: "Yes, but I wanted to. You are special to me."
Wesley: "Say… would you want to grab some Arr'Bucks with me and we can enjoy the view together?"
Sita: "Oh Wesley…"
Sita: "Of course, I would love to grab coffee with you."

There are four special promotions for this event (price varies):
February 6th : A "Kickstart" bundle, with 5x Potted Flower

)
February TBC : A "Last Chance" bundle for the Topiary Fountain 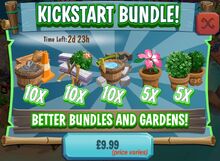 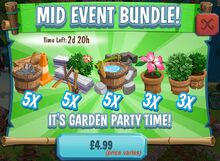 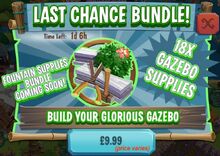 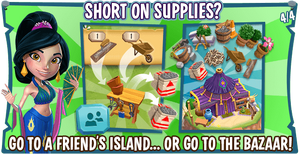 Your garden decorations will remain in place after the event ends (like previous build events).

You can "feed" your Grand Gazebo 1x Rose

, and your Topiary Fountain 1x Fish

to obtain rewards (which will depend on the friendship level reached at the end of the event).

The waiting time before being able to feed again is also dependent on the friendship level reached at the end of the event :

Retrieved from "https://paradise-bay.fandom.com/wiki/Grand_Gazebo_and_Topiary_Fountain?oldid=23072"
Community content is available under CC-BY-SA unless otherwise noted.