After the event :
1x Board

Finn finds another Drafting Table and asks Pike to help him build the Dreadnought Dragster - a ship built to outrun any on the seven seas! You will need to use specific items to level up the Table (similar principle to the previous gathering events).

The Dragster's Drafting Table is available from June 28th 17h UTC and the event runs until July 4th 04h UTC.
You can place the base of the Table on your island by dragging it in from the game's build menu (free).

Levelling Up and Rewards

To upgrade your Table you must "feed" it with specific items from your mills or harvesters, or collected from dock or TradePost orders :
Board

The make times and heart rewards for these items are shown below :

There is also a special item available at the Bazaar :

are required to buy items at the Bazaar and are obtained :

with other TradeMasters (see Wrecker's Wrench page to see how to do this).

Each time you supply items to your Table you will receive

rewards.
Each time you level up your Table you will receive various rewards and decorations (see below).

A Ship to Outrun any on the Seven Seas!

Finn: "Pike! I found another drafting table! Can you give me a hand with it?"
Pike: "Sure thing, lad! Let's haul it onto the island and take a look!"
Finn: "Wow! This looks different. What kind of ship is this?"
Pike: "Well lad, this one is made fer speed!"
Finn: "Speed? That sounds fun!"
Pike: "A greater thrill ye'll never find."
Finn: "The table needs us to give it stuff!"
Pike: "Aye! We'll need to trade to get everythin' it needs."
Finn: "Cool! Let's get started!"

Finn: "Pike, have you ever raced a boat before?"
Pike: "Aye, lad! Once, in me younger years. Found meself nearly out of a ship!"
Finn: "Whoa! Did you lose?"
Pike: "Aye, but just barely. It was such a close race they let me keep me ship though!"

Finn: "Did you ever race again after that?"
Pike: "Only fer fun, lad. Ye can't be a pirate if'n ye don't have a ship!"
Pike: "I was fast though. I coulda been the best."
Finn: "Sometimes I'm not sure when to believe you, Pike..."
Pike: "Always believe old Pike, lad. Always!"

Keani: "Finn, what are you working on over here?"
Finn: "Pike and I are building a racing ship!"
Keani: "Does that seem like...a good idea?"
Pike: "Well, we're gonna find out, lass!"

Keani: "I must say, this design is quite impressive."
Pike: "Aye! And ye know what? I think I've seen this vessel a'fore."
Pike: "She's a famous ship! Used by a pirate turned racer!"
Pike: "We're on to somethin' special here, lad!"
Pike: "The Dreadnaught Dragster, she is. Built to outrun any on the seven seas."

Wesley: "Who was her captain, Pike?"
Pike: "I knew him briefly before he ran off with his riches!"
Pike: "He was a very famous pirate, but only ever took two ships!"
Wesley: "Only two ships? Even I've taken more than that!"
Pike: "Those two ships had enough treasure fer him to retire on. How much treasure did ye get?"
Wesley: "You know... I'm not sure. I'll have to count..."

Finn: "Pike, can you teach me to sail this ship when we're done?"
Pike: "Nervous, lad?"
Finn: "I've never sailed anything this fast before!"
Pike: "Ha! Yer a natural if I've ever seen one, lad. But of course I'll teach ye."

Finn: "We're just about ready to set her in the water, Pike!"
Wesley: "You're almost done!"
Finn: "I can't wait to take it out for a spin."
Pike: "We gotta keep tradin' and fillin' the draftin' table, lad. We'll be done soon!"

Keani: "We've done it!"
Keani: "We'll be cutting through the sea in no time!"
Finn: "Let's take it out!"
Pike: "Don't worry, lad,Old Pike'll teach you?"
Pike: "We'll be out on the open seas soon!"
Wesley: "Don't you think it's dangerous? Sailing so fast?"
Pike: "Quit yer belly achin'. I've done this a'for"
Wesley: "That doesn't make me feel any better..."
Keani: "Alright alright. Let's set sail!"
Pike: "Aye, let's. We worked hard, now it's time to play hard!"
Finn: "Let's find some friends to race!"
Pike: "Yer gonna be the best racer around the island!"
Finn: "Let's take her out on the water! Everybody hold on!"

There are two special promotions for this event (price varies): 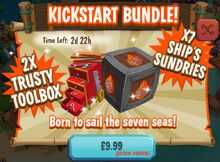 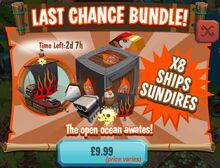 Caution: If you already have all of the above pets maxxed you will receive 2x Dyes or 2x Primo Pet Treats

Your Drafting Table will remain in place after the event ends (like previous gathering events).

You can "feed" your Table with 1x Board

to obtain rewards (which will depend on the friendship level reached at the end of the event).

The waiting time before being able to feed again is also dependent on the friendship level reached at the end of the event :

Retrieved from "https://paradise-bay.fandom.com/wiki/Dragster%27s_Drafting_Table?oldid=19755"
Community content is available under CC-BY-SA unless otherwise noted.