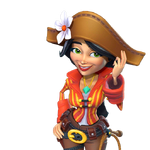 Clara is a world explorer who becomes trapped inside of the cave at the top of Paradise Bay.

Clara travels the world searching for relics. She had many stories about her grand adventures, from trekking the Himalayas to living with a tribe of baboons in Africa.
While hunting for relics on Paradise Bay, Clara becomes trapped in a cave.
You have to clear the land (for 12.500

at Level 20) and use a Powder Keg (recipe to buy at the Bazaar and item to build at the Blacksmith in 12h) to release her.
Clara was also trapped under a volcano for a year. She claims not to have minded it since the moles kept her company.
Clara also knows Pike and mentions they are old friends.

Clara claims to be an explorer, though her clothing and friendship with Pike suggests she is (or was) a pirate. Clara has long black hair, which she keeps tied in a low pony tail. There are a few grey streaks in her hair, though it is mostly covered by a large, brown tricorn hat decorated with a pink flower. She wears a loud orange and yellow striped shirt with wide sleeves; the shirt is partly opened to reveal a white blouse underneath that is kept tucked into her brown pants. Clara accessorizes with a rope on her left hip and a pistol on her right; she also wears a gold necklace with a green gemstone.

Retrieved from "https://paradise-bay.fandom.com/wiki/Clara?oldid=21149"
Community content is available under CC-BY-SA unless otherwise noted.